Greg Jennings does some Ponder-ing 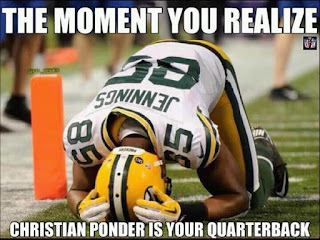 Posted by packrphan at 5:41 PM

We have some catching up to do

It's been a while since our last post here, Packer fans. Far too long, in fact. Our apologies. Several reasons for that. Among them, the bad taste (still) of the loss to San Francisco in the playoffs. That's one that has stuck with us -- and many Packer fans -- for a long time. We won't rehash it...just check our last post for the angst-ridden post-mortem of that game. Another reason for the lapse between posts...something akin to the "interregnum" between Popes...not that anyone here retired or anything. Nor was there the gathering of Packer fans in foam cheeseheads electing a new leader here. It was just a time for a break. And, let's be honest. There really wasn't much going on except talking about what had happened and what might happen. (Wait...isn't that what we're still doing? Isn't that really about all we can do even now?)

But now that free agency has been in play for several days and the draft is upcoming at the end of next month...well, things start to get a bit real again, don't they?

So, let's just catch up on a few things that have happened since we last gathered here, shall we? This is by no means a comprehensive list. More of a top-of-mind thing. You can fill in the gaps.
Draft Stuff
Our last bullet point in the list above began to hint at the upcoming draft. This will be a big one for the Packers (aren't they all?) given the number of departures from the team, as well as the obvious needs: defense, running back, defense, offensive line and...defense.

Would the Packers use their top draft pick -- number 26 overall -- on a running back? Some mock drafts think so, with several projecting Alabama running back Eddie Lacey as the best of the crop and perhaps available when the Packers are on the board. Some compare him to Frank Gore. He's a powerful back, more adept at rushing than receiving and not a good blocker. In the Packers' scheme, blocking is a premium. That may mean -- if the Packers look to actually find a featured back for the first time in seemingly a generation -- that they look Montee Ball's way. The Packers could do far worse than taking Ball. But whether they see him as a first round pick...? Time will tell.

As for other possible first-round picks, the mock draft boards are all over the place. So until we get a little closer to the draft, where things may begin to sort themselves out a bit, we'll refrain for the moment from joining in the speculation.

Well, Packer fans, we did a bit of catching up today. Hope you found it helpful. We'll be a bit more regular here now that the off-season stuff starts to gear up a bit. So, please, check back once in a while, will you please? Thanks. We appreciate you reading. We really do.
Posted by packrphan at 8:18 AM